of oil removed from groundwater

The Greenwich Mohawk brownfield is made up of three adjacent properties spanning just over 20 hectares in an urban area with many residents living nearby. From the late 19th century on, the properties were home to several industrial farm equipment manufacturers, all of which were closed by the late 1980s. Over time, the properties deteriorated significantly.

Beginning in 2002, the City of Brantford commissioned several remediation studies to assess the environmental conditions of the site. The studies confirmed extensive contamination to the site, including gas, diesel, oil, heavy metals and other chemicals, as well as structural debris and underground storage tanks. 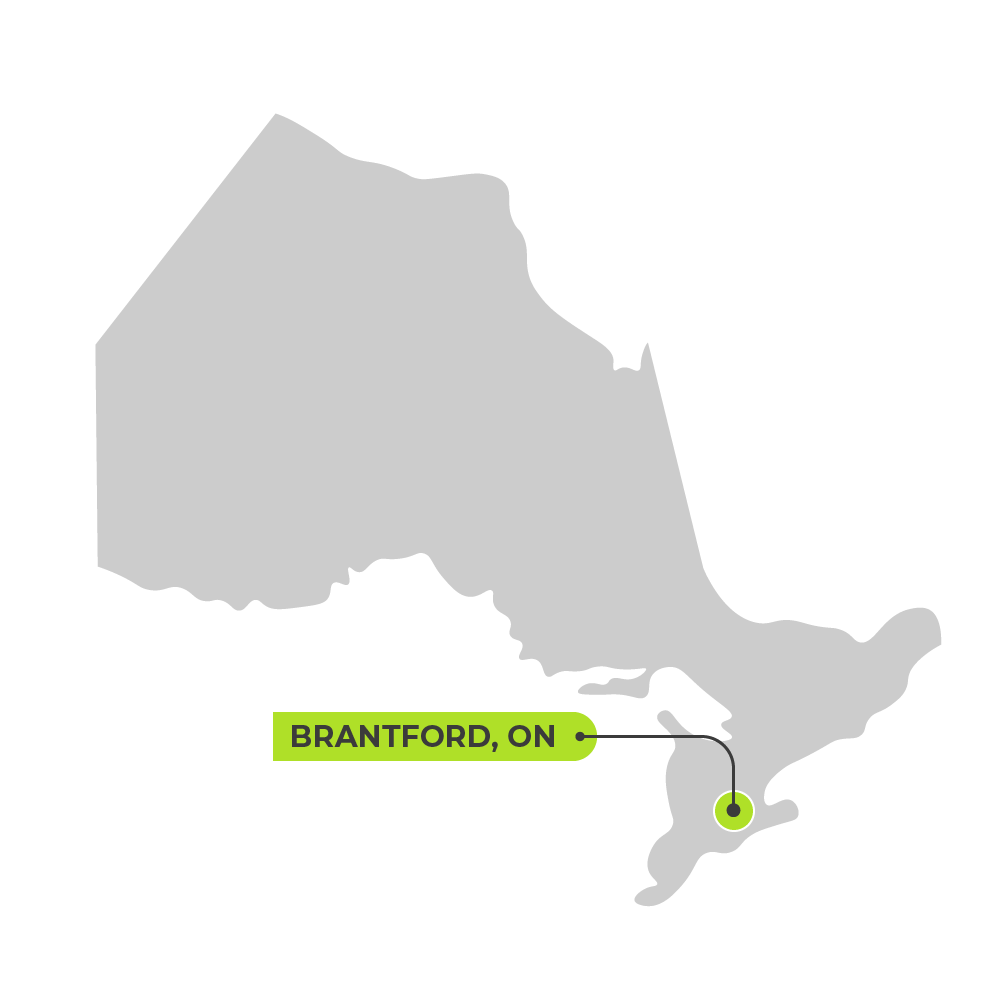 Watch this video where Tara Tran, Senior Planner for the City of Brantford, discusses the work that went into the two-year cleanup of the Greenwich Mohawk brownfield site.

The issue of ownership was initially difficult as the site sat abandoned for many years. Legislation also needed to be changed to allow liens and tax arrears to be forgiven by the federal and provincial governments. By 2007, however, the city had acquired all three properties and after much advocacy by community members and the municipality, federal and provincial funding was secured for the massive remediation project.

To avoid the environmental and social costs of conventional remediation (removal, offsite disposal and replacement of huge amounts of soil), the city explored other options. Several onsite methods were tested to reduce costs and greenhouse gases by cleaning and reusing soil in place.

Developing an appropriate plan to restore the lands to residential and parkland standards took several years, but once the city proceeded to full-scale remediation in 2015, it moved very quickly. In two short years, 148,900 cubic metres of contaminated soil were excavated. The majority—73 percent—was treated onsite and reused, and only 27 percent was disposed of offsite. In addition, 120,000 litres of oil were skimmed from the groundwater.

Having contributed to Canada’s industrial output for over a century, a 20-hectare site a kilometre southeast of downtown Brantford, ON, has found new purpose.

This project is a formidable example of all levels of government and the community working together to bring about positive environmental, economic and sustainable land use outcomes. The successful completion of this project has now set the stage for the exciting redevelopment of these lands and the revitalization of an entire neighbourhood."
–Kevin Davis, Mayor, City of Brantford

The community supported the project, even when the large residential neighbourhood next to the site experienced odours from diesel fumes in the summer. The city paused the project for four months to address and resolve the odour concerns. Even with the resulting delays and unexpected costs, the city was still able to meet its deadline of spring 2017 for completion of the cleanup and finished the project $2 million under budget at $40.8 million.

Thanks to the leadership of municipal councillors, the efforts of city staff and the support of community members, the Greenwich Mohawk land is now ready to fulfill its potential to stimulate the revitalization of the entire Mohawk Lake District.

This webinar teaches participants how land use decisions are tied to the fiscal health of a municipality and its ability to achieve climate targets.

Tara Tran, Senior planner, shares tips on how to sustain your efforts and progress in brownfield (or others) projects.

Webinar recording: Take your project from study to capital

Watch this webinar recording and discover how others have successfully converted studies into a capital project that provides social, economic and environmental benefits.

GMF's Brownfield Roadmaps provide a detailed overview of the process of bringing contaminated or abandoned sites back into productive use in your province or territory.

A snapshot of emerging trends, key issues and best practices in sustainable land use.

Are you interested in learning more about brownfields? Are you starting a brownfield initiative or program, and want more information on what other communities across the country are doing? Sign up for our Fostering brownfield redevelopment email series

The LiBRe program is structured around a best practices framework for becoming a municipal leader in brownfield renewal.

Guide: Getting started on your brownfield sites

Discover how to raise awareness and secure a formal commitment to support brownfield redevelopment in your municipality. Read the guide.

Guide: How to create and implement a brownfield strategy

Guide: Building partnerships for brownfield renewal in your municipality

Webinar recording: How to prepare a GMF capital project application

Need advice for preparing your GMF capital project funding application? Watch our webinar recording to hear tips from our staff and find out what reviewers are looking for.

See how two communities benefit from evaluating their brownfield programs and find tips you can use in your municipality to enhance your offering.

Cleaning up contaminants and redeveloping a brownfield site can bring communities a number of environmental, economic and social benefits. You can achieve even greater benefits by incorporating sustainable approaches throughout the site remediation and risk management activities.

Any technique that remediates or manages the risk of contamination at a site has an environmental benefit as it eliminates or reduces exposure to contaminants. Some techniques, however, are more sustainable than others.

Use this easy-to-follow path to navigate the process, learn about the legislative framework and find funding for redeveloping brownfields in Alberta.

Use this easy-to-follow path to navigate the process, learn about the legislative framework and find funding for redeveloping brownfields in BC.

Use this easy-to-follow path to navigate the processes, legislative framework and funding for redeveloping brownfields in Newfoundland and Labrador.

Use this easy-to-follow path to navigate the processes, legislative framework and funding for redeveloping brownfields in Nova Scotia.

Use this easy-to-follow path to navigate the process, learn about the legislative framework and find funding for redeveloping brownfields in Ontario.

Use this easy-to-follow path to navigate the process, learn about the legislative framework and find funding for redeveloping brownfields in Manitoba.

Use this easy-to-follow path to navigate the process, learn about the legislative framework and find funding for redeveloping brownfields in Nunavut.

Use this easy-to-follow path to navigate the processes, legislative framework and funding for redeveloping brownfields in Prince Edward Island.

You can use various techniques to find out whether a suspected brownfield site contains contaminated soil or groundwater.

Get a sense of the services required at different project stages and find providers using various directories.

As part of a plan to build a University of Waterloo satellite campus next to its downtown core, the City of Stratford completed a Phase II Environmental Site Assessment and Remedial Action Plan for the Cooper Site, a 7-hectare former industrial site.

The Town of Ladysmith commissioned three studies of contamination at a former industrial site on its waterfront, to review options for remediation.

Use this easy-to-follow path to navigate the process, learn about the legislative framework and find funding for redeveloping brownfields in Quebec.

Use this easy-to-follow path to navigate the process, learn about the legislative framework and find funding for redeveloping brownfields in Northwest Territories.

Almost every Canadian municipality is home to a brownfield site.

Webinar recording: How to build partnerships to help revitalize your brownfields

Waterfronts were once bustling engines of a past industrial economy; some now sit vacant — void of the productivity that once supported their communities.

Learn best practices in brownfield revitalization you can apply in your municipality, and understand FCM's brownfield funding opportunities and resources.

Browse through a range of tools to help you evaluate your options and compare potential benefits.

Use this easy-to-follow path to navigate the processes, legislative framework and funding for redeveloping brownfields in New Brunswick.

Discover brownfield redevelopment initiatives and advancements in Canadian municipalities made during the Leadership in Brownfield Renewal program's inaugural year.

Join this webinar to get practical ideas for working with partners and community groups to bring abandoned properties back into productive use.

Watch this webinar recording for an introduction to the process of developing a brownfield site in your community, from the environmental assessment to site remediation.

Conducting an efficient tendering process is a key step in managing a successful brownfield redevelopment project.

A pilot project for an initiative that has potential to bring a brownfield site back into economically productive use.

A feasibility study for an initiative that has potential to bring a brownfield site back into economically productive use.

A capital project for an initiative that brings a brownfield site back into economically productive use.

A plan that establishes a vision and priority actions to support sustainable development at the neighbourhood-scale.

A capital project of an initiative that generates renewable energy on a brownfield site, with or without its remediation.

A feasibility study of an initiative that generates renewable energy on a brownfield site, with or without its remediation.

A pilot project of an initiative that generates renewable energy on a brownfield site, with or without its remediation.

A feasibility study of initiatives that have the potential to bring a brownfield site back into economically productive use.

A capital project of an initiative that has the potential to bring a brownfield site back into economically productive use.

A pilot project of an initiative that has the potential to bring a brownfield site back into economically productive use.

A plan that identifies and evitalize your community’s brownfields.

Measuring the value of natural assets

E-learning course: an introduction to energy modelling for municipal staff

This event is ongoing